I’m Going to Be Okay: Finding the Confidence to Open Up

My initial burst into SAA (Sex Addicts Anonymous) came rather dramatically, as I tend to think many people’s entrances into 12-step groups tends to be. Although I felt at home from the start, it was a bit of a culture shock. My issue is pornography, but in SAA groups pornography is par for the course. In other words, pornography is a rather mild behavior compared to some of the different issues that people struggle with. Quickly, I became less alarmed by the behaviors that I previously had limited knowledge of and was able to see each person as an individual—as a unique child of God.

One man that impressed me from the beginning was Greg. Greg was bald, middle aged, bulky, and of Italian descent. Greg has been in the program for about three years and had been sober from his “acting out” behaviors for two. In order to get sober, not only did Greg commit himself to a 12-step group and a therapist, but he also went to inpatient rehab. Going to inpatient rehab was not an experience reported by most people in the group, so it immediately signaled to me that he was rather “intense” about his recovery. As we went around the room introducing ourselves my first night in a SAA meeting, Greg introduced himself by saying, “Hi, I’m Greg. I’m a sex addict, love avoidant, codependent, adrenaline seeking, overeating rage addict.” He said it with such tenacity and honesty that I remember thinking, “Wow, I freaking love this guy!” More to it, Greg talked openly about his Christian faith and his belief in a personal God. Greg is dedicated to his church and even sings with his church’s band. One night at a meeting he shared his musical talent by singing “Broken Together” by the Christian band Casting Crowns, which was incredibly moving.

Like many addicts, I tend to have problems trusting people, so even though I really enjoyed Greg’s presence in meetings it took me a while to warm-up to him. Eventually, I worked up the courage to see if he would like to meet me for coffee so that I could share my story. We met at a Panera Bread about 40 minutes north of where I was living at the time. Even though I had a sense that I should trust him, I was quite nervous. We were in a public place and so I was afraid of other people hearing the personal details of my life. However, our time together was splendid. It was the first time that I had actually been able to sit down and explain my story to someone without feeling judged. I only experienced compassion and understanding. And Greg wasn’t pushing me to take the next step and work the program—he was simply being kind and generous. By speaking with him I felt known and understood. We both come from dysfunctional families and so he explained some of his family dynamics and through this I was able to understand my story as well.

Being that I felt my world had fallen apart, this conversation filled me with a sense of hope and direction. So often with people that get caught up in addictions it seems that there is a loss of a sense of direction—a collapse of meaning and worth. Recovering from this is complex and difficult. Stories are a way to bring a complex reality into an organized vision. Stories aren’t just nice ideas—they are a part of the remedy. They provide a context and a platform to understand how to navigate out of our turmoil.

Finding Beauty Amidst the Chaos

I started attending SAA meetings in August of 2016. When I met with Greg for the first time it was late September of that year. I was living in a suburban area at the time that wasn’t too far from the country. I have this odd habit of taking time out to drive out to the country and find a spot to park so that I can enjoy the farm country. That day, after Greg and I met, I drove out to my favorite spot so that I could connect with God. I specifically remember sitting in my car looking out across the farming landscape and feeling at peace. It was a way for me to bring beauty into my life, which at that time had felt like pure chaos. As I drove back home I gave Greg a call and thanked him for listening to me and for giving me hope. After hanging up the phone I thanked God for the gift of Greg and told myself, “I’m going to be okay.” Funny how it only takes one sincere person to change your perspective on a situation. 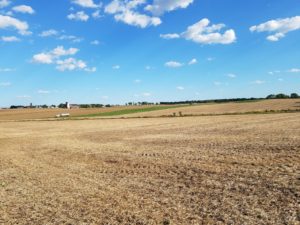 If you have been attending meetings for a while but haven’t really engaged, who is that person you really would like to connect with but haven’t worked up the courage to ask him or her to go out for coffee, lunch, or to even be a sponsor? I encourage you to pray for the grace and opportunity to make this happen!

Quarter Joe is a lifelong Catholic and has been in recovery for pornography addiction for nearly three years. He is passionate about the spiritual path of the 12-step model and the power of Jesus in the Eucharist in bringing healing and transformation.