A Step Forward After Relapse

The chicken fat dripped onto the charcoals and sizzled and flared and smoked. And the baseball game was loud on the radio. The announcer between play by play activity talked about a frosty cold bottle of beer. Those simple words ended months of sobriety.

It must be admitted that that first beer tasted so good. And somehow this time would be different. Attempts were made to slowly pace the drinking. But within a week things were out of control again. You sink back into that same rut, that same cycle. And then the beer doesn’t taste that good again. A new low is realized.

Then comes a sort of conflict, a battle with pride, of walking back through those doors and into that room where there is the camaraderie of hope. But along with the hope there are those eyes of judgement upon you.

It was a while ago, an old timer, a man I considered a pillar of sobriety, looked with definite condescension upon me and remarked that I was doing nothing but using the 12-step program to get sober for a little while. But that was never the intention, and there was always sincerity in attending the meetings and sharing in those meetings. But those words of that man always made it difficult to go back through those doors and into those rooms.

It is easier to kneel and pray than to go back to meetings. Being raised by two devout Catholics, I watched from a distance as my father made simple visits to churches at times when there were no services. 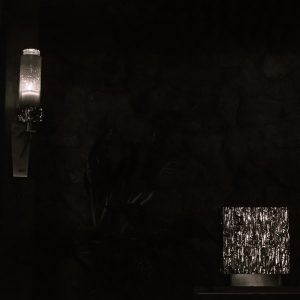 And the church doors are always open in this small town in Wyoming. Even late into the night I am welcome to come inside for awhile. And most often without the distraction of others I find the stillness of the Presence. A single candle glows at the side of the tabernacle. It is a small light that barely flickers in a red glass globe.

There has always been gratitude. And there is much to be thankful for. Though things through life have not gone as planned, and certainly not as hoped for, nonetheless the blessings have been countless. It is a time to simply say thanks.

There has almost always been a realization of right and wrong. And yet in the throes of temptation so easily things and situations can lead you astray. Kneeling alone in the small church, it is a time to confess and pray for forgiveness.

There has always been hope. Even when clouded by the pain of a miserable hangover, with a little time, there has been the look toward a better path, a new way, a new light and dawning. Even in times of near despair there has been that one little flicker of hope, and knowing that it doesn’t have to be this way.

My prayers become a plea for freedom from the apathy that always tends to lead back to relapse.

It is quiet in this place and the candle light glows and barely flickers.

It is well known from past relapses that without meetings and working the program sobriety never lasts long.

And then in my wanderings, I came upon a footbridge across a lazy muddy river. And to the other side of the river is where I wanted to go.

And somehow, going back to meetings became analogous to a trek across that footbridge. With the weight of the first step the whole of the bridge sways, bounces. And for a short while all is so uncertain. But the bridge is sturdy and strong enough. One step at a time.

Bob lives on the high plains of Wyoming. He is a cradle Catholic, geologist by training, and consummate wanderer of the backroads with camera and guitar. And with an ongoing struggle with alcohol, he has found relief in a 12-step program and his Catholic faith.