I write this amidst the serenity of the Prince of Peace Abbey monastery in Oceanside, CA. My eyelids feel a bit heavier than usual this evening, seemingly bearing the weight and pressure of some emotional exhaustion. A dear friend, Dorothy Byrne, who passed away on May 7, 2014, sent me here. Earlier today I had the honor of speaking for a moment at her memorial service about my relationship with her over the past two and a half years. I would like to share a bit of that relationship here, while attempting to do some justice as to how magnificent of a woman Dorothy was.

Dorothy passed away as a sober, recovering alcoholic. Just a few weeks before she passed away she celebrated 45 years of sobriety, a member of the class of 1969. The woman had been through struggle and success throughout those years and stayed sober to tell about it. She told me all about most of it, as well as the years that preceded her sobriety, in a long road trip her and I took together in July of 2012.

For several months prior to the trip I had the pleasure of meeting with Dorothy one-on-one nearly every Sunday after the 9:00 AM Mass at St. Brigid Catholic Church. After Mass we would walk together next door to the Lutheran church and drink the Lutheran’s coffee (prepared and maintained, however, by a Catholic and fellow recovering alcoholic). It was, and still is, delicious coffee. The conversation was even better.

One day Dorothy (whose Daughter lives in Chicago) mentioned to me taking a trip back to the Midwest together. The topic was brought up in passing as I was sharing with her a bit of what it was like being raised in Wisconsin. A few weeks later I was summoned to the Midwest for a very close friend’s bachelor party – a weekend on a golf course in Ohio, but departing from Illinois. I recall being nervous about asking if she really wanted to make the trip with me, thinking that she might think I’m crazy or pressuring her into doing something she may have half-heartedly meant when the thought was originally shared.

She was more excited about it than I was. We began planning. We set a date, giving ample time to rest as she could only handle so much time in the car in one sitting. It turns out that long car rides become a bit uncomfortable when you reach 80 years old or so. She proposed that we visit the Crystal Bridges American Art Museum in Bentonville, AR after she saw a 60 Minutes piece on it and read a Time Magazine article about the rather new museum founded by the daughter of Sam Walton (Wal-Mart). We were both pumped up. I will always remember July 16 as the day Dorothy (43 years sober) and I (.75 years sober) left San Diego to explore the country.

A week or two before we departed she did make one request to me, which she later shared she was nervous to ask about. She requested that we not listen to the radio while we were driving. At all. I wasn’t going to be the one to make any conditions on how we travelled, so of course I agreed. Thus, we had plenty of time to share stories and for us her to share wisdom. She told me about growing up in New Jersey in the 1930s and 1940s. Her memories from childhood and into adult life were incredibly vivid. She told me about her family, her daughter and grandchildren, and her son who passed away just days after his birth (ironically while she was living in Freedom, WI – 20 minutes away from where I grew up). A little over a year later I would get the opportunity to visit David Byrne’s grave site, offer my prayers to his soul and their family, and share the experience with Dorothy and Susan. 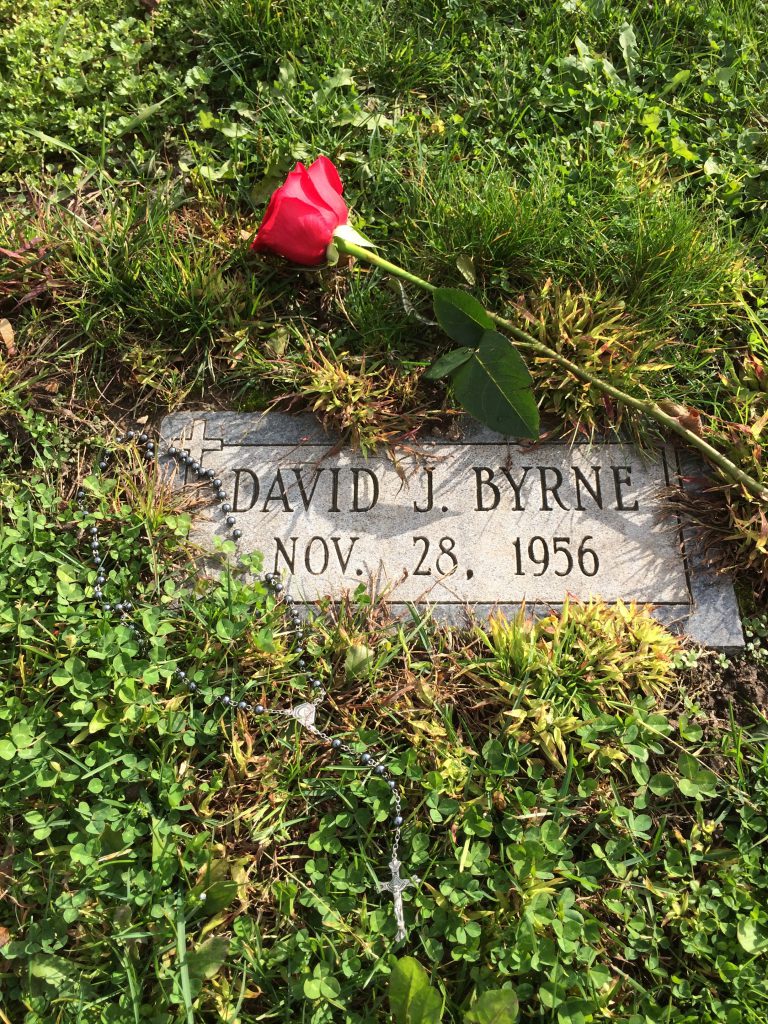 Visiting the grave sight of Dorothy’s son, who passed away at a very early age in Freedom, WI.

Dorothy was also an outstanding listener, always asking me to begin sharing what I was going through (both on our trip and during our weekly get-togethers). She took a great deal of interest in my personal journey and my relationships. However, whenever I presented these as problems she would do an incredible job of putting things into perspective:

Dorothy: “You know what your problem is, Scott?”

Me: (Looking at her in awe, waiting intently for what was to come next)

Dorothy: “Your problem is alcoholism. The rest is just circumstance. Treat your real problem and the circumstances will take care of themselves.”

We put on about 5,000 miles together and passed through 15 different states. We both saw Mount Rushmore for the first time and also both got to cross “lunch at Casey’s Cafe in Chamberlain, SD” off our bucket list. Dorothy would explain to me the different types of cows that we saw along the way and point out every church we passed, citing them as “part of our team” or not. While we took time for silence on the ride, the conversation never went dull. “It was the trip of the lifetime,” she would later tell me. “My lifetime,” I would clarify.

God put Dorothy and me in each other’s lives at just the right time. A few months after taking the trip, Dorothy’s health started showing signs of decreasing. Months after that, over a cup of Lutheran coffee, she would tell me that she was diagnosed with stage 4 lung cancer. She was ready to meet her Creator and she wasn’t going to fight it. She was powerless and not in control, as she constantly reminded me about the affairs taking place in my life.

The beautiful woman I am describing approached death as gracefully and as dignified as she approached life. She was an example of a faithful woman through trial and triumph. She would go on to tell a mutual friend that she learned more in the last 90 days of her life than she did collectively in all the days that preceded it. She had a very intimate friendship with Jesus Christ and taught me the importance of keeping a friendly conversation going with Jesus at all times. The lives she touched may never be able to be counted. In fact, friends of mine who had never even met this spiritual giant would often ask me, “How’s Dorothy doing?”

Dorothy Byrne was special and is now in the saving hands of God. While I know I can find her on a power bench at the church next door, she will forever be with me and all those who had the pleasure of knowing her. It is with true joy that I pass along her great legacy as she awaits us in the Life to Come. In fact, Dorothy was proof that we can all find Heaven here on earth.

Dorothy and Scott in April 2014, a few weeks before her passing.

Disclaimer: This was originally published in 2014 on Words of Witness, the St. Brigid Catholic Young Adult Community blog.